Nazarbayev and Putin to discuss integration within Eurasian Economic Union


Presidents of Kazakhstan and Russia are to discuss integration within the Eurasian Economic Union, according to Russia’s RIA Novosti.
September 30 President Vladimir Putin of Russia is to pay a working visit to Kazakhstan. He and Kazakhstan’s President Nursultan Nazarbayev will be participating in the IX forum of cross-border cooperation of the two nations. “Prior to the plenary sitting, the two leaders are expected to discuss Russian-Kazakh relations and integration efforts within the Eurasian Economic Union under way”, the Kremlin’s Press Service reports.
The forum will be primarily focused on innovations in hydrocarbons production and processing. Among those in attendance there will be reps of key ministries and major companies based in the Eurasian Economic Union member states. Such forums have been held since 2003, with the first forum held in Ekaterinburg of Russia.
Earlier the country’s media reported that the Majilis (lower chamber) started working to ratify the agreement on the Eurasian Economic Union. The final decision on the agreement is to be announced December 10. The agreement was signed in Astana May 29. Back then, when meeting President Putin of Russia and President Lukashenko of Belarus, President Nazarbayev said the signing marked a new stage of relations among the three nations.

For more information see:http://en.tengrinews.kz/politics_sub/Nazarbayev-and-Putin-to-discuss-integration-within-Eurasian-Economic-Union-256404/
Use of the Tengrinews English materials must be accompanied by a hyperlink to en.Tengrinews.kz

Russian legislators have revived plans to ban long-distance calls via Skype and similar services, saying they foster terrorism and an illegal drug mafia. A bill has been submitted to the State Duma proposing a curb on the so-called over-the-top services (OTT), which allow calls from one phone to another via the internet. Phone operators identify these calls as local, not long-distance, which leads to lower charges per minute.
OTT service operators should be made to identify their calls to phone operators, according to the bill. The measure would enable operators to charge callers the full price of long-distance calls. Russian phone operators miss out on approximately 90 billion rubles ($2.3 billion) of revenue a year because of OTT, or about 10 percent of the total revenue, according to RBC business news website.
Besides, the OTT services, which cannot be traced by security services, provide a safe communication channel to terrorists, spammers and drug dealers, the bill's co-author Yaroslav Nilov of the national-populist party LDPR said Wednesday.
The bill's review was set for this week, but postponed until October to give authors time to dispel the false notion that it implies a complete ban on Skype, Nilov said, Tass news agency reported. Microsoft Corporation, which owns Skype, had not commented on the bill as of Wednesday afternoon.
Some Russian telecom operators actually use OTT services for their own long-distance phone call services to cut costs, but without slashing prices for customers, RBC reported.
INC News, 24/09/2014
Posted by Unknown at 8:58:00 PM No comments:


President Vladimir Putin is seen as Russia's highest moral authority, a poll published Wednesday revealed. The state-run Public Opinion Foundation asked individuals from 43 different regions across Russia whether celebrities can be considered moral authorities. One-third said no.
Of the two-thirds of respondents who said yes, 36 percent see Putin as a shining beacon of morality.  Trailing behind Putin was a diverse group of Russian cultural figures, such as famed novelist Alexander Solzhenitsyn, folk singer Lyudmila Zykina and pianist Denis Matsuyev. These artistic and literary heroes were seen as moral authorities by 9 percent of those who believe celebrities can set the moral compass.
Foreign Minister Sergei Lavrov and Defense Minister Sergei Shoigu lagged far behind the commander-in-chief, being considered moral authorities by 6 and 5 percent of the question's respondents, respectively. Another 4 percent of those who believe that public figures can be seen as moral authorities said Vladimir Zhirinovsky, the firebrand leader of the Liberal Democratic Party who recently called for a re-establishment of the Russian monarchy, was among them.
Revered journalist Vladimir Posner, Soviet hockey legend Vladislav Tretyak, Chechen leader Ramzan Kadyrov and the Russian Orthodox Church's Patriarch Kirill were each considered moral authorities by only 1 percent of respondents.
INC News, 24/09/2014
Posted by Unknown at 8:54:00 PM No comments:

The French Hostage before been killed


A video has been released that shows a French hostage being beheaded by a group linked to Islamic State, it is being reported.
Herve Gourdel, a 55-year-old hiker from Nice in southern France, was kidnapped on Sunday by Jund al Khilafah.
The group had given France a 24-hour deadline to stop its airstrikes against IS in Iraq. In the clip issued by the Algerian militants, the tourist was seen kneeling with his arms bound behind his back, as four masked men read a message in Arabic which condemned France.
Mr Gourdel was then pushed on to his side and held down. Shortly after the group - known as the Caliphate Soldiers in English - released the video, France's foreign minister Laurent Fabius insisted the abduction would not deter his nation's participation in a US-led offensive against IS.
The video was entitled "A Message With Blood To The French Government", and began to circulate on jihadist websites on Wednesday. It began with an excerpt of Francois Hollande, France's president, making a speech, before showing Mr Gourdel in his final moments of life.

Tomorrow 24 September: if all will be archived, India will be the first in the marathon to Mars 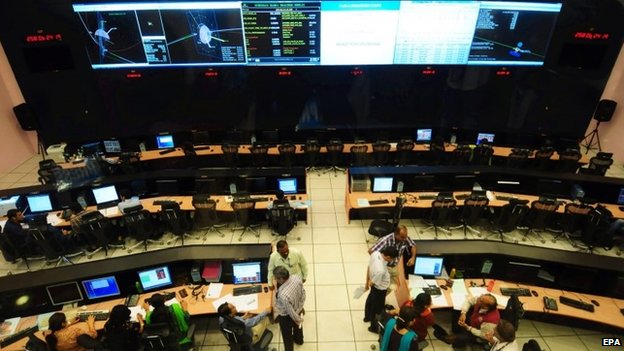 India's maiden mission to Mars, the Mangalyaan has been on a 300-day marathon covering over 670 million kilometres (420 million miles). Science writer Pallava Bagla traces its journey as it nears its planned arrival in orbit.  On the morning of 24 September, the Indian Space Research Organisation (Isro) will slow down the spacecraft sufficiently so that it can be caught in the orbit of Mars. If that happens, "India will become the first Asian country to have achieved this and if it happens in the maiden attempt itself, India could become the first country in the world to have reached distant Mars on its own steam in the first attempt," explains Isro chairman K Radhakrishnan.
Both Russia and the US failed in their maiden attempts. The first Chinese mission to Mars called Yinghuo-1 failed in 2011 alongside the Russian Phobos-Grunt mission with which it was launched. Earlier in 1998, the Japanese mission to Mars ran out of fuel and was lost.
Undoubtedly, India - a late starter - is way ahead of its Asian rivals in trying to get to the Red Planet.
INC News, 24/09/2014-via BBC
Posted by Unknown at 12:08:00 AM No comments:


Five rights advocates were reportedly prevented from leaving Russia to attend a UN-organized conference taking place in New York this week.
The Russians were due to take part in the World Conference on Indigenous Peoples on Monday and Tuesday, but were unable to fly out because of incidents ranging from damaged passports to punctured tires and multiple police checks.
Rodion Sulyandziga was scheduled to co-chair a roundtable on lands, territories and resources, but his passport was taken away by border police at Moscow's Sheremetyevo Airport. Fifteen minutes later, when he got it back, he found that one of its pages was missing, rendering the passport void, the activist wrote on his Facebook page.
Anna Naikanchina, who was due to speak at the conference on the rights of indigenous peoples at national and local levels, was also stopped at Sheremetyevo. While she was going through passport control, several pages of her passport were cut and the document declared void, according to Sulyandziga.
INC News, 23/09/2014
Posted by Unknown at 12:00:00 AM No comments: